skip to main | skip to sidebar

Sign the petition to the European Parliament in order to commemorate Witold Pilecki and other greatest european heros who fought against totalitarian tyrranies of the twentieth century. Visit: https://www.citizengo.org/en/166433-european-day-heros-who-fought-against-totalitarianism
Posted by Michał Tyrpa at 9:50 AM 15 comments:

Two years after United States Holocaust Memorial Museum reply to the Paradis Judaeorum Foundation we repeat our question: when Witold Pilecki in the Permanent Exhibition of the USHMM? 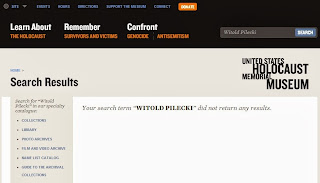 It's been two years since United States Holocaust Memorial Museum answered the Paradis Judaeorum Foundation, who for 6 years runs worldwide campaign "Przypomnijmy o Rotmistrzu" ("Let's Reminisce About Witold Pilecki") on the letter concerning Witold Pilecki's place in the Permanent Exhibition of the USHMM.

Two years passed by and Witold Pilecki's contribution in the effors to stop the horrors of Auschwitz are still cenzored by the Permanent Exhibition of the United States Holocaust Memorial Museum. For details look below (in the materials posted on www.witoldsreport.blogspot.com in last years).

In February 6, 2014, two years after Steven Luckert's PhD answer to the Paradis Judaeorum Foundation we call upon volunteers to repeat our question to the USHMM: when will you fulfill the promise given us in February 6, 2012? When shall we see the truth about Witold Pilecki's heroism in the Permanent Exhibition of the Holocaust Museums all around the world?

When Witold Pilecki in Permanent Exhibition of the United States Holocaust Memorial Museum?

In February 6, 2012, United States Holocaust Memorial Museum answered on the letter sent by the Paradis Judaeorum Foundation concerning Witold Pilecki. Afer a year the participants of the "Let's Reminisce About Witold Pilecki" ("Przypomnijmy o Rotmistrzu") worldwide civic campaign are asking the USHMM about when Pilecki's deeds will be shown to everyday visitors. 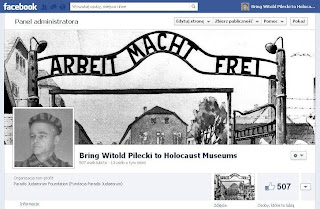 Look for details and join us on special Facebook 'event':

Poles from the Union of Military Organization at Auschwitz are the biggest heroes of the Holocaust era. The name of Witold Pilecki is printed in golden letters in the history of the Jewish people condemned by the Germans to extermination. The memory of the heroic struggle of Captain and his soldiers should not become the subject of a suspicious fair. And this is a request filed by the Forum of Polish Jews. 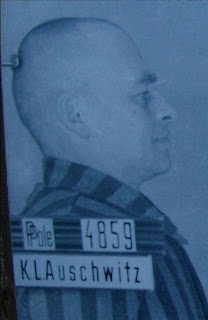 Since January 2008, a social action "Przypomnijmy o Rotmistrzu" ("Let's Reminisce About Witold Pilecki") takes place. Among the many initiatives that constitute more than four-year history of this apolitical citizens' initiative (see documentation at www.michaltyrpa.blogspot.com), are also efforts to commemorate the achievements of the creator and soldiers of the Union of Military Organization in the U.S. Holocaust Museum.

In August 2010, the Paradis Judaeorum Foundation (Fundacja Paradis Judaeorum) of Krakow (initiator of the “Przypomnijmy o Rotmistrzu”/"Let’s Reminisce about Witold Pilecki") sent a letter to the United States Holocaust Memorial Council in Washington D.C., with the suggestion to take account of Witold Pilecki in the exhibitions of the centers cultivating the memory of the extermination of the Jewish people.

In February 2012, after waiting for more than a year and a half, the longed-for response from Washington finally arrived (see a scan below). The curator of the permanent exhibition of the Holocaust Museum, promised to take account of the demands concerning the Captain, submitted by the Foundation Paradis Judaeorum (see also page StefczykInfo and here).

It is highly surprising that professional historians, nay! specialists in the Holocaust, did not know the achievements of Polish heroes of the Union of Military Organizations. If, however, (which is, indeed, hard to believe) it really was so, Paradis Judaeorum Foundation was able to convince the historians of the Holocaust to devote due tribute to Rotamaster (cavalry Captain) Pilecki.

After Dr. Steven Luckert’s February response it might have been be expected that the Washington establishment would fix the effects of years of neglect, resulting from silence about the work of Witold Pilecki, through which the elites of Great Britain and the United States (including the prominent Jews!), knew from the beginning the details of the execution phase of the so-called. "Final Solution".

Recently, however, it turned out that the Washington Holocaust Museum treats the principle pacta sunt servanda (observe contracts) in a completely arbitrary way, while the U.S. media unleashed another anti-Polish hysteria. This time it was that after the expiration of the term for which the State Museum Auschwitz-Birkenau loaned to Washington the prisoner barracks, the Polish side - under the terms of the agreement - demanded the return of borrowed items.

Venomous, anti-Polish comments appeared in the American media, which willingly and often wrote about the "Polish concentration camps", but never about the author of "Witold's Report". Here in America the Poles (thanks to J.T. Gross) are generally known as zealous accomplices of the Holocaust, who after the war looted the Jewish estates, and now dare to demand the return of what the Washington museum borrowed from them... It is hardly surprising that the consultations between Polish and U.S. officials stalled.

And then the institution under the name of Polish Jews Forum raised a curious project. Its essence would be exit of the impasse by a casemerger of the case of Auschwitz barracks with proper commemoration of rtm.Pilecki, cf. text „Spróbujmy z niezgody uczynić zgodę”.

I must admit that after reading the article, at first I thought it was just a stupid joke. How is that? So the twenty-first century, serious institutions can not (do not want to?) keep their sovereignly taken commitments? Today, in March 2012, the memory of the achievements of Polish heroes will be the subject of shady auctions? Witold Pilecki Merit is the currency with which the authorities and the Polish people would buy in America the truth about Auschwitz?

So this is hutzpah in its pure form!

Hasten to explain, then, to all those who do not understand that the sacred memory of Captain and his memorable deeds were not and will not be subject to any gesheft! Observe the contracts, dear Friends and Allies! And Witold Pilecki in the museums of the Holocaust should be given what he deserves! I it has to be settled in a honorable way! Does America even understand what the word means?

In this context, combining the perennial American-Jewish negligence against the Captain with the total disregard of their own obligations expressed today seems but sneer. It is also further evidence of the lack of respect for our hero.

For this writer it is even more amazing that the same Polish Jews Forum for over 4 years (actually since 20 February 2008) had no time to respond to the invitation to the group of institutional participants social action "Przypomnijmy o Rotmistrzu" ("Let's Reminisce About Witold Pilecki").

And so today, in a fit of inspiration, the Forum of Polish Jews has recognized the Captain ... One would probably not know if the cause of this sudden awakening were news, which can recently be found at www.witoldsreport.blogspot.com

Dear Friends: Jews, Americans, Poles! The memory of Rtm. Pilecki, annihilated and defiled for decades, is not for sale! The memory must not be manipulated, nor politicized. It must not be made the subject of geszeft! Memory of Witold Pilecki is sacred.

Let's Reminisce About Witold Pilecki! We Must Give Testimony..

Polish version of the text – “Nie róbcie geszeftów z pamięci Rotmistrza!” - was published in March 6, 2012 and sparked a heated debate (in Polish), see THIS LINK. 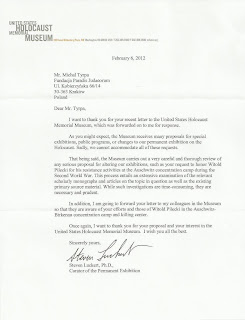 
Let's Reminisce About Witold Pilecki! We must give testimony..
-
Posted by Michał Tyrpa at 4:14 PM 17 comments: 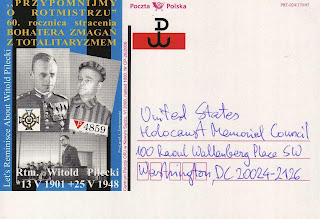 Information from the "Bring Witold Pilecki to Holocaust Museums" site on Facebook.

Rotamaster Witold Pilecki (1901-1948) was the only one person in history who volunteered to be imprisoned in Nazi German concentration camp. Pilecki was a founder of prisoners underground organization in KL Auschwitz - Union of Military Organizations (Związek Organizacji Wojskowej, ZOW). After World War 2, Pilecki has been murdered by the communists in Stalin’s occupied Poland.

Since January 2008, Polish NGO - Paradis Judaeorum Foundation (Fundacja Paradis Judaeorum) runs civic campaign “Let’s Reminisce About Witold Pilecki” (“Przypomnijmy o Rotmistrzu”). One of its goals is to introduce to the public worldwide an outstanding testiomony about Auschwitz and the Holocaust, so called: “Witold’s Report”.

In August 30th 2010 Polish NGO – Paradis Judaeorum Foundation sent a registered letter to the United States Holocaust Memorial Council in Washington D.C., asking to reminisce about Witold Pilecki in the Holocaust Museums, which does not ( ! ) mention about Pilecki at all.

More than a year passed by, and there was no answer.. Pilecki’s deeds are still being concealed by the US Holocaust Museums.

Let’s encourage important institutions around the world to teach the truth about tragic history of those who strived to stop the Holocaust in the very beginning, in the very core of Auschwitz hell on earth!

Let’s Reminisce About Witold Pilecki! We must give testimony..

4) Text “Volunteer for Auschwitz” in The Catholic Messenger

See also: declaration of the US Holocaust Memorial Museum concerning official answer for the Paradis Judaeorum Foundation's letter from August 30th 2010: http://www.facebook.com/holocaustmuseum/posts/160352977396176
Posted by Michał Tyrpa at 9:09 AM 193 comments:

International Day of the Heroes of the Fight Against Totalitarianism

...may be celebrated soon.


February the 18th, 2009 the UEN Group in European Parliament unanimously passed a bill on establishing 25 May the International Day of the Heroes of the Fight Against Totalitarianism. If the proposal tight in the resolution will meet with approval of the majority in European Parliament, we shall soon celebrate new international holiday commemorating all the Heros who fought with nazi and communist totalitarianism. It means that one of the goals of our worldwide civic action "Let's Reminisce About Witold Pilecki" ("Przypomnijmy o Rotmistrzu"), initiated by Polish Paradis Judaeorum Foundation in January 2008 may be accomplished soon. For details look below: 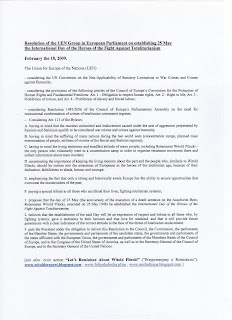 Let's Reminisce About Witold Pilecki! Not only in Europe.
Posted by Michał Tyrpa at 6:32 PM 25 comments:

Should Mel Gibson produce a movie about Witold Pilecki?